Voxitatis (this Web site) has announced the development of another “app” for its Answer Maryland system at maryland-k12.org. The demo is available, free of charge and free of advertising, here. The demo works with Safari on a Mac or PC, Chrome, Firefox, and Internet Explorer 9 on a PC. It will not work with versions 8 and lower of Internet Explorer. but it’s time to upgrade, as Microsoft puts it, to a “more beautiful Web.”

Based on our first app on this fourth-grade Common Core math standard, this is an example of how to use the Answer Maryland system to build on the work of other educators to create your own tools for demonstrating your lessons. The base tool used fraction bars, but I thought wheels would be better, so I simply changed the graphics to make wheels instead of bars. Also, I wanted a bigger fraction with the numerator written on top of the denominator rather than inline. So, again, I just modified the original demo program to make it how I wanted it.

Teachers everywhere, time to get into technology and use it as a collaborator, not simply as a reader. 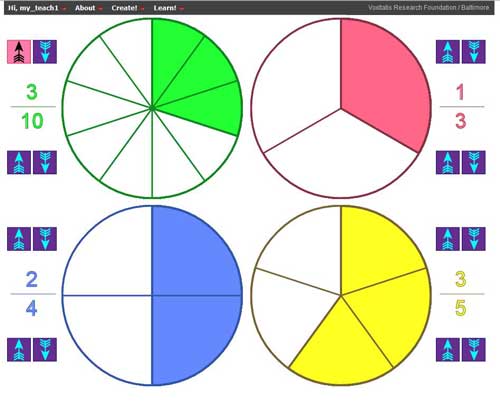 The US Common Core curriculum for mathematics in fourth grade has, among other concepts students might be tested on, the following:

Compare two fractions with different numerators and different denominators, e.g., by creating common denominators or numerators, or by comparing to a benchmark fraction such as 1/2. Recognize that comparisons are valid only when the two fractions refer to the same whole. Record the results of comparisons with symbols >, =, or <, and justify the conclusions, e.g., by using a visual fraction model.

One of my hallmark theories is that kids learn best by self-directed exploration of concepts, even from the earliest of ages. This online manipulative is more than just a set of practice problems or drills. It lets kids manipulate the four fractions and then compare the amount shaded in the fraction bars themselves.

This tool will actually let them explore, make mistakes without the consequences of a high-stakes test, and—simply put—learn at their own pace.

Let them explore what happens to the shaded area as they increase the denominator—or how the pieces contract all the way around the wheel. Just let them play with it, without any testing or quizzes. After a while, you will find they have learned more than they would have learned if you had been quizzing and drilling them in a high-speed manner all along.

As always, Answer Maryland is free for everyone. If you sign up for an account on the service, you will be able to start a conversation about this manipulative demo or about any other topic your heart desires. If your teachers, parents, classmates, or friends have accounts as well, your conversation will be available for them, to help as might be needed.