BALTIMORE (April 20)—We have a jobs problem in America, and we have a schools problem. Educators, reformers, politicians, and the general public are weighing in on the latest magic pill, but what they often fail to recognize is that the key to any long-term solution is right in front of them: happy kids who get good support. 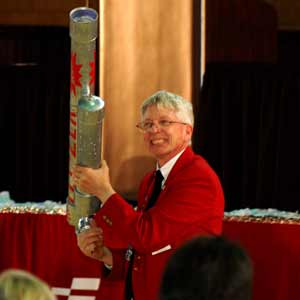 Board member Greg Solberg launches t-shirts to the crowd before the conference.

Kids are happy to go to a biomedical class at a technical high school before starting regular classes at their “home” high school, as Carlee Barrett, SkillsUSA Maryland’s president, said. Tech centers are provided across the state, like the JM Tawes Career and Technology Center in Somerset County and the Center of Applied Technology North in Anne Arundel County. Usually before students go to their home school, they take their tech classes and possibly an elective at the technical center.

Kids are also happy when, at age 20, they find they already have five years of experience working as a nurse assistant with real patients and can out-interview 25-year-old candidates anywhere. Cloe Ayenu, a former SkillsUSA Maryland state officer, recounted the story of that interview, beaming a smile from ear to ear throughout the retelling. “I just showed them my portfolio from SkillsUSA, and they pretty much offered me the job on the spot,” she said.

SkillsUSA Maryland is the competitive side of Maryland’s Career and Technical Education program, and in one sense, this 40th annual conference of the Maryland organization was a competition and awards ceremony. In another sense, though, it was a party, where students showed off what they know and showed all the adults the best kind of support schools can provide.

Chuck Wallace from the Maryland State Department of Education has ably directed SkillsUSA Maryland for 15 years. He welcomed more than a thousand students to the historic and imposing Fifth Regiment Armory in midtown, where he himself competed in the state track finals a few decades back. He told them he continued to be “both inspired by and proud of Maryland’s talented CTE students. The passion and commitment for what they do is often a core element of continued success, as is the support of family, educators and business and industry partners.”

And while the program may not be a magic pill—I’m quite sure no such pill exists—it sure makes a lot of kids happy. They hug their families and their fellow competitors, even those who might take a championship away from them. A girl who had just won second place in one competition was met in the wings by a waiting father. When she got to him, they just hugged each other. And it’s not only physical hugs but supportive efforts as well that touch students. After all, in order for students to study heating, ventilation, and air conditioning, somebody has to donate the equipment. The evening’s program booklet listed more than 100 corporate sponsors, known more correctly as “business and industry partners.” Rodney Bolton, for example, helps to make sure kids get a good education when it comes to auto repair, as told here.

As part of our ongoing series entitled “Vox ætatis,” a Latin phrase that means “voice of an age group,” I talked with SkillsUSA Maryland’s outgoing president, Carlee Barrett. She’s a junior at Stephen Decatur High School in Worcester County, and she will be traveling, along with all the first prize winners from this year’s state competition, to Kansas City for the national conference in June. As it was late and I was holding up a busload of kids who had at least a three-hour ride ahead of them back to Worcester County, some of Ms Barrett’s answers were rushed, but I think she represented the SkillsUSA students very well in her responses. I extend my sincere thanks to the students and staff of Worcester County for giving me and Ms Barrett time to conduct this interview.

The torch and hands, 2 parts of the SkillsUSA emblem (just imagine the electron orbitals).

What were your thoughts about SkillsUSA before you became president?

I wasn’t really too sure what it was until I signed up to become a local officer. And then all of a sudden, when I went to [the conference where all the local officers get trained], I was just amazed and inspired by all the leadership opportunities. And when I saw the state officers doing the ceremonies on stage, I was just like, I want to be one of those people—I want to do that, absolutely. So I wanted to get active as soon as possible.

[To become a state officer,] you had to be a local officer at your home school. Once you did that, you told your adviser that you wanted to become a state officer. Then you have to complete the officer interview satisfactorily, take a written test, and say a speech in front of your peers—and then hope you get elected.

What’s it like for people to compete, as they face written and practical tests in their area, tests that might require them to solve a situation they’ve never encountered?

It’s nerve-wracking, also because a lot of times, there’s multiple people in your competition and people have never done anything like this. They’re just kind of thrown into the competition and forced to do what they know and hope that it comes out all right. Everyone just does amazing, but of course, there can only be one person going to nationals. So after all the hard work and only one person goes, it can be a bummer.

Now that you’ve served as president for a year in Maryland, how has your opinion of SkillsUSA changed?

It’s changed. It’s completely different, because I got to see all the aspects of it. I find it to be completely amazing and inspirational to all students, because all the opportunities they get out of all this are just completely amazing, like all the opportunities to meet new people. When you go to nationals, you meet people from all over the country. They’re just all great people all around. You don’t really get to meet people like that except at Skills.

It’s really like a family—that’s really what it is. That’s why I love this place so much: because everyone is just so close. If you don’t even know anybody, you can just go up and be like, “Congratulations,” and they’ll hug you—which I find to be very comforting.

Do you think a program like SkillsUSA can help the unemployment situation in Maryland or in the US?

Is there anything else you’d like to add as Maryland’s outgoing president?

Thank you, Carlee. Have a safe trip home.

Thank you, you too.