NEW YORK (June 6, 2013) — Commissioner Bubbles isn’t a real puppet, of course; he just sometimes plays one in real life—mainly at the behest of billionaires who want to test schoolchildren more often so it’s easier to fire teachers, replacing them with new recruits, and easier to close public schools, replacing them with a new brand of charter.

But focusing on things that are completely irrelevant in the minds of 9-year-olds has gotten us nowhere so far, and that trajectory is not likely to change with New York’s new tests, which the state says are aligned to the Common Core. Organizers of a classroom-like event here would prefer that we turn our attention to what New York’s schoolchildren have been telling them is important to their own learning. 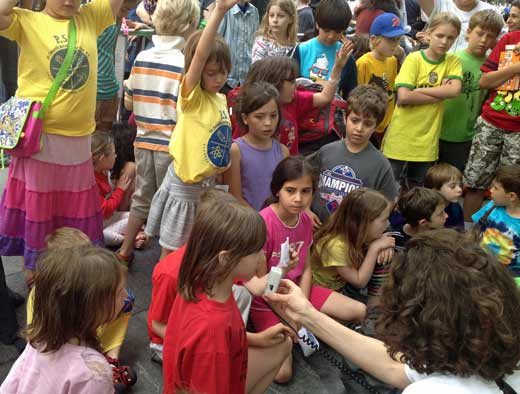 Vicky Finney Crouch takes suggestions from students (all photos: Danielle Heaps / Voxitatis).
To create today’s declaration, Jody Drezner Alperin and Vicky Finney Crouch wrote on the scroll some of their students’ suggestions for what they believe are the fundamental ingredients every school should have, including more field trips, more art, more time for reading, more hands-on lessons, and being “allowed to move [their] bodies more in the fresh air.” Read the entire declaration.

Commissioner Bubbles (before and after)

The active participation of students in this particular exercise—deriding a puppet and creating a document like the one from the Continental Congress—is just one example of the way these teachers use their own acting talent to engage students. The unfortunate object of today’s scorn, a puppet named Commissioner Bubbles, started out with a big head and a plan for the school day that included no recess, limited bathroom breaks, and hours of standardized test prep. But after realizing the students’ declaration had put his plan to shame, he reappeared with a smaller head.

City Council member Brad Lander, who represents the 39th District in Brooklyn, talked with some of the students at the event. They asked him what he liked best about New York’s schools, and he said, “I love how creative you guys are … and how hard the teachers work to help you guys learn.”

Many of their creative ideas, put into the declaration, hold promise for increasing the quality of education and may get a closer look by school officials because kids are speaking for themselves and telling schools what works with them and what they like about school. Kids who like what their teachers do have a better chance of staying in school and getting more out of school than those who are forced to sit through too many hours of test prep drills.

But more importantly, adults who run the schools may analyze these ideas because they represent the honest, spontaneous voice of our schools’ primary stakeholders: the children who attend those schools. Their declaration here today is the voice of democracy, just as certainly as the Declaration of Independence was the voice of democracy 237 years ago. These words are spoken by people for whom the government should be working, and their ideas—a bottom-up model for school reform rather than a top-down model—merit consideration and analysis.

City Council member Jumaane Williams, D-45 (Brooklyn), stands with students.
The scroll will be delivered to New York State Education Commissioner John King. Copies will go to the mayor, schools chancellor, the New York Board of Regents, the City Council, teachers’ union presidents, US Education Secretary Arne Duncan, President Barack Obama and his wife, and others.

“We’re coming together in support of our amazing public school teams,” Ms Drezner Alperin said. “The high-stakes testing culture handcuffs our teachers and administrators and keeps them from doing what they do best. We want to see the tests return to being just one valid measure of success among many.”