A high school student in San Diego, Calif., after her school was put on lock-down last spring, invented an insert for students’ backpacks that’s guaranteed to stop a 0.44-caliber bullet fired from a distance of 5 meters, CNN reports. 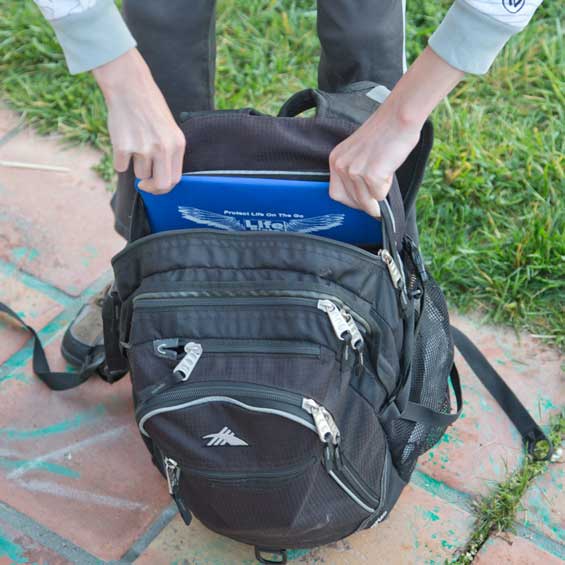 The LifePlate shield (Photo: Mighty Mojo LLC)
Of course, the LifePlate™ insert won’t protect kids from bullies or cyberbullies. Nor will it protect them from criminals who don’t bother to take aim at students’ backpacks. But for only $150, it provides a fair amount of personal protection against gunfire.

Lauren Sorge, the inventor of the LifePlate, described her experience during the lock-down to the company that produces them as frightening: “I was huddled in the back of a classroom with no protection if the “alleged” gunman was to enter the room. I considered using a textbook as a shield, but knew it would never stop a bullet. That’s when I came up with the idea of using a notebook sized bullet-proof shield that could easily fit into my backpack,” she said.

And now for other bulletproof inventions

The University of Maryland, Eastern Shore, is reported to have spent about $60,000 on bulletproof whiteboards. They work as whiteboards in that instructors can write on them with dry-erase markers, but if anyone should try to fire a bullet through them, their efforts will fail.

I was not aware that the university had an issue with gunmen firing at instructors or students through walls that had no bulletproof whiteboards on them, but I guess it has been an issue in some people’s minds.

After every random act of violence, officials at the Mighty Mojo firm in San Diego, which makes the LifePlate shield, say that sales increase. Do you really think protecting your back is worth $150? Do you also need protection for your front? What about your head? I mean, it protects that square foot or so on your back, but if the bullet hits you anywhere else, you’re still in trouble.

The real problem, though, is that shields don’t really work. I don’t mean to suggest they technically fail to stop a bullet that hits them—there’s plenty of research, like here, to show that they can be very effective when it comes to their bulletproof properties—but they don’t stop the gunman. If someone wants you dead and you don’t have a gun to fire back, he’s going to keep coming, right?

They work for riot police, that is, because they’re otherwise armed to the hilt, but probably not for a high school senior huddled in the corner of a classroom.