At Longfellow School, one of the oldest schools in Bozeman, Mont., teachers are focusing this year on the learning standards in the Common Core, the Bozeman Daily Chronicle reports, and they’re finding ways to spread a single lesson plan across many standards and subject areas.

In one second-grade class, for example, a math lesson about how to make a paper cone and a paper cylinder soon turned into a lesson on writing. Let me explain. 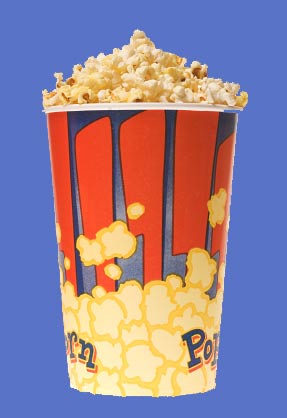 First, students had to figure out how much popcorn the paper cone would hold, and then, since they had popcorn handy, they decided to throw a party. And that meant writing invitation letters, explaining all the reasons parents should attend, using sort of a mixed-modal persuasive letter.

A little bit of creativity thrown in, and you’ve got a rap song about “yummy” popcorn.

In another classroom, high school students helped first-graders write a story. One wrote about a pet chinchilla, the Chronicle noticed.

This kind of creativity in lesson planning existed, I’m sure, before the Common Core, as did the flexibility to go with the flow whenever kids reveal to their teachers a new use for something that’s already in the classroom. But under the new standards, there seems to be more openness to exploring new ways of using old lessons than there was before. That’s happening mainly because teachers are also exploring the standards, testing them to see how they play out. And there’s something to that.

This is not to say that reading a good novel doesn’t promote creativity. It expands one’s vision of the world, and if one has an expanded vision, it can certainly be argued that creativity ought to be enhanced. But it’s somebody else’s vision—and it didn’t really happen. The Common Core emphasizes, in the English language arts standards, reading of informational text and articles, such as histories, biographies, science pieces, news articles, and so on. It’s known as content literacy, and the “content” portion of that is mostly science and social studies. Creativity is what comes on top of the Common Core, such as the kids in Montana who composed their own rap songs.

One of the biggest complaints about the Common Core, which I want to address here, is that it inhibits creativity on the part of teachers. For example, Diane Ravitch, on her blog, quotes George Ball, past president of the American Horticultural Society and chairman of the Burpee Seed Company, as saying:

What’s lost in Common Core is the human factor. Teachers, whose performance evaluations and salary are pegged to their students’ test results, are deprived of the freedom and creativity that is the oxygen of learning. In an ever-changing world, common sense would propose a broad range of educational approaches rather than a single one designed to ready all students for college. In education, as in gardens, a monoculture is doomed to decay and eventual failure.

Now, I’m sure teachers in Montana could have figured out a way to use popcorn and write invitations under the state’s old standards of learning, so maybe what happened in Bozeman is nothing new, or at least nothing that should be credited to the Common Core. But the reality is that it did happen under the Common Core. It was creative, teachers did it using the Common Core, and this is, as Mr Ball put it, the oxygen of learning. “We’re teaching human beings, we’re not teaching stuff,” the Chronicle quoted Longfellow’s principal as saying. “That underlies everything we value at Longfellow School.”

The standards don’t preclude a “broad range of educational approaches” and they don’t prescribe a “single [approach],” either. Rather, they leave the approach completely open to teachers. As long as kids learn how to write a persuasive letter and how to calculate the volume of a right cylinder, nobody says they can’t throw a popcorn party. Nobody at all. It could have been a Kool-Aid party as well, so that approach is also open to teachers. In fact, there’s an infinite number of approaches teachers can take for this standard.

Some might argue that not all teachers are as creative as others. Some might argue that school districts impose a curriculum on classroom teachers that would never allow a popcorn party. Both those arguments are completely true, unfortunate, misguided, and have absolutely nothing to do with the Common Core.

It makes the sheer volume of other teachers’ work they can draw on much larger, and that is not a bad thing. If students’ creativity is boosted by reading a novel, teachers’ creativity would also, logically, be boosted by reading more lesson plans. Not as exciting, maybe, but it has the potential to open teachers’ eyes to new ways of teaching material that they might not have been guided to before the Common Core’s adoption in almost every state.

Continuing our analysis of the creativity argument, I have to think opening new doors and windows will have the effect of enhancing, rather than discouraging, creativity among teachers. I wouldn’t have quoted somebody, though, unless what he said has a great deal of truth to it. That comes in the second sentence of the excerpt I selected. If teachers’ performance evaluations and salaries are tied to student test results, those teachers are not going to have the time, and their brains aren’t going to have the motivation, to explore different creative avenues. Creativity takes time to develop. Not all kids get it at the same pace, and many students will have a need to explore their own creativity with the math and language arts skills being incorporated. But if there had been a test in Bozeman and teachers needed to worry about that, I feel confident, there would have been no popcorn party, because teachers would have been drilling and killing.

Longfellow doesn’t have to worry about that, though. It was one of only two schools in Bozeman that met adequate yearly progress last year. More than 95 percent of the students met grade-level standards in both math and reading last year, and the percentage of students who qualify for free or reduced-price meals at the school is among the lowest in the city. It was also reported that a fundraising drive for the arts raised $50,000 and about $7,000 was raised to purchase nonfiction reading materials. Most schools in the country aren’t this well off.

But as far as the Common Core is concerned, if teachers in Bozeman can use popcorn and write rap songs, so can anybody else. There is evidence, in at least one school this week, that the Common Core does not preclude or even inhibit creativity on the part of teachers.

It is a problem, however, that our reliance on tests, tests that are flawed in more than a few cases, is killing our understanding of the Common Core and how it can be used effectively—and creatively—in our classrooms. Let’s take a journey across the country now, to New York state, where tests based on the Common Core were a miserable experience for students, teachers, and parents last spring. In a letter to parents that ripped the tests to shreds, principals came to the following recommendation:

Without a doubt, the emphasis on testing is threatening other important State initiatives, most notably the implementation of the Common Core State Standards (CCSS). Parents who see the impact of the testing on their children are blaming the CCSS, rather than the unwise decision to implement high stakes testing before proper capacity had been developed. As long as these tests remain, it will be nearly impossible to have honest conversations about the impact of the CCSS on our schools.

This idea strikes me as a common sense approach. Because the standards in the Common Core are so closely linked to the tests, bad tests will make it impossible to have any real conversations about the standards, which will prevent teachers from implementing those standards properly. The channels of communication have to remain open, but we need to be clear: objections over any specific tests, standardized testing in general, or the use of student test data for evaluating teachers are irrelevant in terms of the Common Core. It’s understandable that people would consider them all together as one piece of their teachers’ job descriptions (and in many ways, they are all lumped together), but attacking standards because of the tests for measuring kids’ progress on those standards isn’t academically honest.

The Common Core itself, as far as it goes, which is not anywhere near any standardized test, is just the list of standards. They appear similar to the standards that were in place in almost every state prior to their adoption. Some specifics need to be edited (the devil is in the details), but over all, the standards can’t be faulted for discouraging creativity, except in terms of the tests being developed and used.