Gov Martin O’Malley visited Dunloggin Middle School (map) in Ellicott City, Md., on Oct 31 and praised students for the hard work they had done to help save the environment, including a local stream and the Chesapeake Bay, the Baltimore Sun reports. 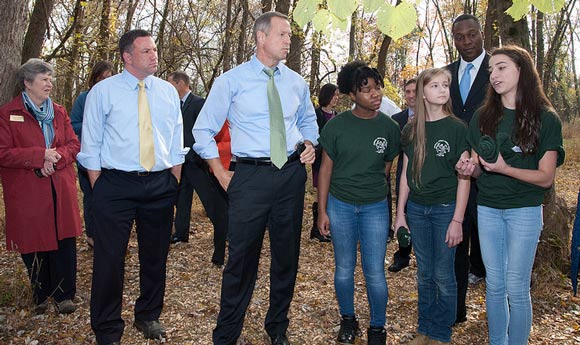 Gov O’Malley, center, outside Dunloggin Middle School, Oct 31 (MDGovpics / Flickr)
Principal Jeffrey Link, who’s in his first year as principal, gave credit for the school’s many environmental projects to two teachers, Pam Kidwell and Dan Blue. The two teachers started working on a stream restoration project about eight years ago, and student participation seems to have taken their ideas to a whole new level.

The Plumtree Branch runs through a wooded area that borders the school, and that’s where the stream restoration project takes root and where it has proven effective. “They’ve done an incredible job here,” the Sun quoted Mr Link as saying. “It left me speechless. They’ve been working on this forever. … It was truthfully ahead of its time.”

On the lighter side, students all said meeting the governor and talking with him about their school experiences was positive. Outdoors, he praised them for keeping the stream clean, the paper reported, and then he went inside to check out the oyster project. He even had to count drops as he tested the pH of the water in the tanks, at his own request. “He asked a lot of good questions and acted like he cared,” the paper quoted one eighth-grade girl as saying about Mr O’Malley. Students also found him to be “a nice guy and very laid back,” according to another student quoted in the article.

Last spring, a group of students from the school took oysters out to the Chesapeake Bay, throwing them in and wishing them well, Patch.com reports. “Go to college” and “Have lots of baby oysters,” they yelled as they threw the oysters in the bay. For the oyster project, Mr Blue worked closely with a consultant from Quebec, who helped incorporate problem-solving skills into the lessons about the environment. He even flew down to visit Dunloggin and see firsthand how the project reached its climax on a boat provided by the Chesapeake Bay Foundation.

“To know is not enough,” Claude Poudrier, the curriculum consultant, was quoted as saying. “Children need to know how to be in action. When they have fun, they learn, and they are ready to be engaged. When they are engaged, they have fun. It’s the egg and the chicken.”

Dunloggin was one of only four US Department of Education Green Ribbon Schools in the state for 2012, and despite being rather far away from the Chesapeake Bay, by Maryland standards, it’s all about making learning fun, which engages students, which makes learning even more fun, and so on, and so on. This level of engagement, unfortunately, takes more money than restricted school budgets allow. Ms Kidwell and Mr Blue told Patch.com they are constantly involved in fundraising and are seeking grants or other help to support the various environmental learning projects at the school.

Congratulations to the students of Dunloggin Middle School on a job well done, and thank you for doing your part to save the bay. I’m glad you learned something—a little, maybe—as you were doing it, and the governor’s visit only underscores the importance of what you do for the community, the state of Maryland, and the several states that depend on the Chesapeake Bay.