Dozens of people were injured and many left with uninhabitable homes Sunday afternoon, as a tornado leveled parts of Washington, Ill., in Tazewell County near Peoria, and nearby Pekin, the Peoria Journal-Star reports. The Chicago Tribune reported that at least one person had been killed by the Washington storm, and two elderly siblings were killed by another storm in New Minden, Ill., just east of St Louis. And according to the State Journal-Register, the death toll had climbed to five from the killer storms as of Sunday evening. 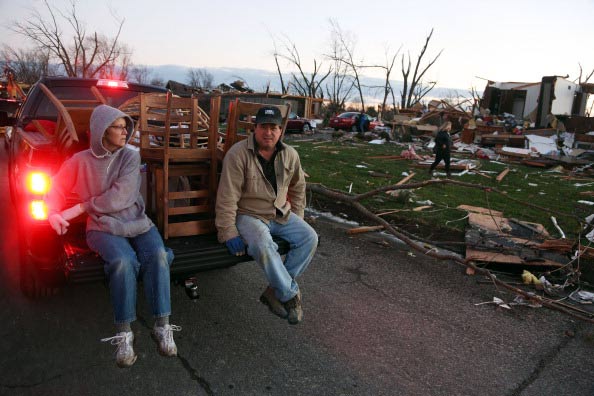 Tina & Gary Junk, of Washington, survey the aftermath (Tasos Katopodis/Getty Images).
Storms like these are very unusual for November, the National Weather Service noted. A cold front moving in from the west simply collided with warmer air to produce the stroms. The severe weather had been forecast for some time—at least since Friday—and many residents had made preparations. The Weather Channel’s website Saturday illustrated the large area in which severe weather was projected to occur:

THE NATIONAL WEATHER SERVICE STORM DAMAGE SURVEY TEAMS HAVE FOUND PRELIMINARY TORNADO DAMAGE NEAR COAL CITY OF EF-2 MAGNITUDE. THIS IS ONLY ONE PART OF THE DAMAGE PATH WITH MORE SET TO BE ASSESSED ON MONDAY.

The scale used to identify the strength of tornadoes is known as the Enhanced Fujita Scale, abbreviated “EF” followed by a number from 0 to 5. The National Oceanic and Atmospheric Administration improved the rating system in 2006, citing limitations in the original Fujita Scale (the “F Scale”) that may have caused inconsistencies in the ratings.

The EF Scale rates tornadoes based on their wind speed, just as the F Scale did, but the EF Scale incorporates more damage indicators and degrees of damage than the original F Scale, allowing more detailed analysis and better correlation between damage and wind speed.

In addition to the tornadoes confirmed in Coal City, Nashville, and Washington, other tornadoes were reported in Dana at 11:36 AM, in Wilmington at 12:25 PM, and in Manhattan at 12:39 PM. Sliding doors from one home in Will County, southwest of Chicago, were found a quarter mile away from the home, the Tribune article said.

It’s not easy to estimate the number of tornadoes in this outbreak, including those Illinois and Indiana. The National Weather Service’s website said that at least 59 tornadoes struck Sunday, most of which were in Illinois, but the number is an estimate and not an official report. Some twisters may have been reported twice, and some may have been missed, so the number is sure to change as the NWS surveys the state.

Scientists report that while we understand tornadoes better than ever, we still don’t fully understand what causes a tornado to become a deadly and destructive storm like an EF-5 supertwister.

Winds of 50 mph were common in the Chicago area, and gusts of 61 mph were reported during the NFL game between the Bears and Ravens at Soldier Field. Winds exceeded that speed around the area, though. In Oak Lawn, just south of Chicago, 75-mph winds were reported, while Crystal Lake and Arlington Heights in Chicago’s northwest suburbs reported winds of 70 mph.

About 79,000 ComEd customers in the Chicago metropolitan area were reportedly without power as of Sunday evening, and crews were said to be working to restore power as quickly as possible.

Washington Community High School was scheduled to perform Shrek the Musical on Thursday, Friday, and Saturday, Nov 21, 22, and 23, at 7 PM in the Caterpillar Auditorium at Five Points Washington. The auditorium has lost power as a result of the storm and will be closed Monday for sure, and possibly other days this coming week.

We haven’t heard about any cancellation specifically, but we are attempting to contact school administrators for more details. At 6:27 PM, local time, the high school tweeted, “There will be no school tomorrow. Thoughts and prayers to all affected by this devastating storm.”

We join them in their thoughts and prayers.