Guest Peter Greene posted on Anthony Cody’s “Living in Dialog” blog on Education Week, here, that teachers generally like standards because they see them as a guide, just as drivers use white lines on the road. But the Common Core (CCSS), he says, is different:

The primary purpose of the CCSS is to call teachers out. It says, “Here’s what you are supposed to be doing, or else. And we’ll be checking up on you every step of the way.” It is not a tool to be used by teachers; it’s a tool to be used on them.

He includes a most excellent example about Orwell’s Animal Farm, which would be “a curious fairy tale about talking animals” under the strict standards of the Common Core. And he’s absolutely right! The standards in English language arts rely a great deal strictly on what’s in the text.

That’s because it’s easier to write standardized test questions about the text, without having to worry about kids weaving all sorts of knowledge and understanding into their discussion. In fact, if all we can test kids on is what’s actually in the text—in other words if we strip away almost all the value of literature that is communicated in ways other than through the printed word—we can write test items that barely literate humans can score. That’s cheaper than having to hire scorers with a college degree who might understand some of the references in the text, some of the historical context of the literature, and so on. “We might even be able to make a multiple-choice question out of it and not pay any humans at all,” the test publishers say, winking at the federal government. 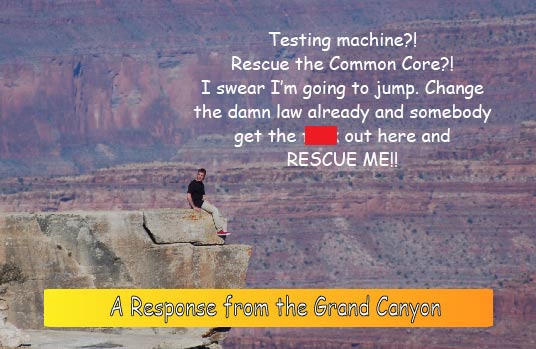 Mr Greene looks specifically at three high school literature standards, (RL.11-12.1, 2, and 3), here. A few days ago, I looked at a third-grade math standard, here, and came to exactly the same conclusion. The standards were not written for teachers. Instead, they were written to facilitate the writing of questions on a standardized test. Since different people have different experiences to draw on that lead to an interpretation of literature, references to what might be valuable in literature are untestable.

With the math standard 3.OA.D.8, I found that it is not even possible to write a standardized test question about estimation. I said it’s important to teach estimation anyway, so my ultimate conclusion was that the standard should remain exactly as it is and be marked as untestable. There are a few problems with that.

First, there is no process or plan to mark up the standards in any way. That means, the people who design the standardized test questions will be able to tell the public kids are being tested on 3.OA.D.8 when in fact they are only being tested on a very narrow scope of that standard.

Second, for Mr Greene’s selected standards, we have to admit, the standards themselves are narrow and reduce literature to a simplistic analysis of text, which has absolutely no purpose but to facilitate the writing of questions on standardized tests. It has no purpose in our classrooms as any kind of “map” for teachers. It’s only intended for test question writers.

As my essay and Mr Greene’s essay illustrate, the attachment of standardized tests to the Common Core has prevented any useful implementation. Standards aren’t a bad thing in general, but since teachers will be evaluated on the basis of the tests, not the standards, the teaching of anything that cannot be assessed on a nationally standardized test is likely to fall into the “if we have time” category, even if it has a prominent place in the standards.

Meanwhile, students are reporting physical signs of stress. They’re becoming ill because teachers are trying to shove content down their throats for which they aren’t prepared themselves, because teachers don’t know what’s going to be on the test yet and that causes consternation. But next year, students will be tested, using nationally standardized tests, on this material, and teachers’ jobs will depend on their performance.

I still see the standards as a map to the classroom, but Mr Greene’s point is well taken. It’s somewhat ad hominem in that he seems to think that just because Bill Gates says something, that’s the way it must be. I would counter by saying that we own the standards now in our individual states. Bill Gates doesn’t own them. Thanks for the money and all to develop them, but we now own them all by ourselves. But the non-ad hominem portion of Mr Greene’s argument is as spot on as can be. In his words:

The biggest mistake in NCLB is that they gave the whole thing a name. The testing, the state standards, the punishing evaluations, the funding pressures—everything was gathered under the No Child Left Behind banner. Oh, how we loathed it. We called it funny mocking names. But even when we couldn’t see the full picture, we knew its name. We knew its name.

This thing that’s happening now? The contempt for teachers, the drive to privatize, the evaluation-based punishment, the dismantling of our profession, the destruction of public education, the redirection of billions of tax dollars, the secrecy, the ill-conceived standards—we can see all its pieces, but the great chewing mechanism does not have a name. The lack of shorthand title for the great galumphing monstrosity allows its creators, our leaders, to pretend that all these are separate elements, when in fact, they are all one well-coordinated machine.

I’m going to put “galumphing monstrosity” on my list of favorite phrases. I have, as he accuses, said the standards themselves, while full of little holes that need to be fixed, are OK, a good beginning. Now I’m not so sure.

Both Mr Greene and I have, independently, found evidence in the standards that they are not provided to us as a map for our classroom teachers to use but instead as a yardstick to rank them by. I wrote that competition is repugnant to the Common Core, and when I said that, I was indeed thinking of the standards as a set of guidelines for teachers. I wrote, as soon as people witnessed the untestability of many standards, such as estimation in third-grade math or depth in the study of literature at the high school level, they would throw the tests on the scrap heap, tweak the Common Core through a national consensus of teachers, and get on with the real business of school.

I envisioned a college of education professionals stretching from coast to coast, having conferences with breakout groups where everyone was speaking with the same vocabulary about different ways to teach 3.OA.D.8 or RL.11-12.1, 2, and 3. They had no worries about how test publishers would assess the material so that politicians can feel good about themselves. But to see things that way, you have to separate the Common Core from the tests, and I’m not sure that’s possible anymore, even if we discount Mr Greene’s argument about Mr Gates as being completely ad hominem.

It’s a nice thought, don’t you think? A college of education professionals? Unfortunately, we are, apparently, according to a rising cadre of Common Core opponents, a nation conceived not in collaboration but in financial gain for a few big corporations. My ideal world, it seems, is a pipe dream.

If the standards cannot be separated from the tests, teacher evaluations, and so on, I may have to give serious thought to qualifying my judgment of the standards themselves. Meanwhile, scores of states are preparing to take field tests this school year on the national tests. It’s mandated under federal law.