A 14-year-old girl was quoted by her teacher in an article in the Baltimore Sun as asking, “Why do no white kids go to school here?” The school that formed the basis of her question was ConneXions, a community-based arts school in west Baltimore, but it might just as easily have been any public high school in an urban center like Chicago, St Louis, Los Angeles, Miami, or Memphis. 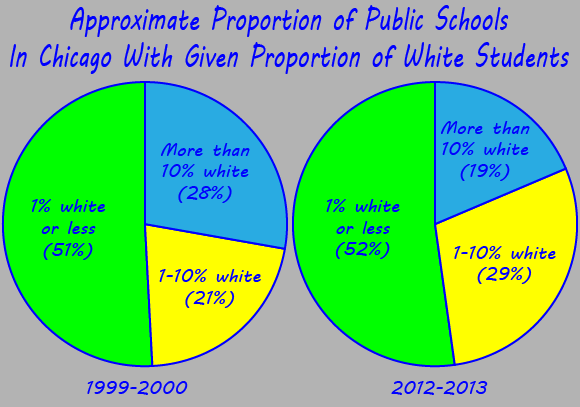 According to data posted by the Chicago Public Schools, public schools in the city are so segregated by race that a slim majority of all schools in the CPS system had student populations that were less than 1 percent white. Furthermore, the number of schools in Chicago with virtually no white students has increased under the No Child Left Behind law, both in terms of the number of schools that are hyper-segregated and in terms of proportion.

To describe the continued segregation of public schools, the teacher, Michael Corbin, writes:

Segregation, today, is a systemic fact of contemporary school life in America, and it perverts the very meaning of public education. Reform programs, standardized test scores, building new buildings, getting a new district CEO or papering a “common core” over our manifest inequality does not change that. … My student, though, is resilient as well as smart. She will not be a victim. However, she is … a messenger. She speaks to those who claim to be working to “reform” public education in Baltimore and America. There is wisdom in what she asks.

E pluribus … separation, by the Civil Rights Project, published in September 2012, is a series that “shows that segregation has increased seriously across the country for Latino students, who are attending more intensely segregated and impoverished schools than they have for generations. The segregation increases have been the most dramatic in the West. The typical Latino student in the region attends a school where less than a quarter of their classmates are white.”

Generation after generation of black and Latino children are finding themselves in schools with no white children, and the problem isn’t going away. No change in curriculum or standardized test will even attempt to address this issue, so it is left up to us, the real people who work with and care very much about the students in our classrooms.

It’s not the color of people’s skin, either, that has everyone so concerned. Rather, we have shown that educational programs tend to be reduced and curricular and extracurricular programs more limited or narrow at schools where few white students are in attendance. This deprives actual children of the education we have promised to all our citizens through the public funding of the public schools.

Research from Indiana University, such as that from Jonathan Plucker and Suzanne Eckes, who have studied segregation, especially that found in urban charter schools that are authorized by universities. They consider questions about whether the university authorizers of public charter schools are doing enough to encourage charter school operators to recruit and develop a diverse student body.

Some charter schools in the US start with a model of strong discipline but often fall short of delivering students who make it all the way to high school graduation. In the public schools, discipline is a problem that leads to many side-effects, as we reported, here. The whole idea of discipline in urban schools seems like a chicken-and-egg problem to me, one in which many of the causes are actually the effects of poverty and an extremely low parental engagement. Why are parents so infrequently engaged in urban schools? Because they’re working two jobs, if they’re even present in their children’s lives.

Another problem is rising rents

A friend of mine talked with me the other day about a shopping mall in northwest suburban Baltimore. She said the mall used to be thriving, with good department stores and lots of foot traffic. Now, since the city pushed public transportation out to the area, bringing poor people from the city out to the mall, the department stores have abandoned the property and the mall is mostly vacant.

There’s movement to build some high-rent apartments in the area. Another friend, who is looking for an apartment, took a tour and found the rents for a two-bedroom apartment, even a small one, higher than $2,500. She can’t afford it, so she’ll look elsewhere, but the development is clearly a signal that poor people need not come out to the area anymore. People who can afford monthly rents in the stratosphere, apparently, will make the mall thrive once again, and a virtual barrier will be created to keep the poor away.

In a recent editorial, the Baltimore Sun declared there’s no more room at the inn for poor people, mainly because of rising rents. This is yet another piece of the complex web of segregation and its causes and effects in our cities, suburbs, and schools:

Just “saying no,” as the Baltimore County Council did recently when it rejected a proposal to build 50 affordable housing units in the Rosedale community, reflects an unrealistic belief that jurisdictions can somehow erect barriers to keep the poor out, when in fact they are already virtually everywhere. Maryland should be using every tool at its disposal to encourage local jurisdictions to increase the supply of affordable housing precisely in order to avoid creating pockets of concentrated poverty in any one area.

Mr Corbin, we thank you for bringing this issue to our attention once again. Is anyone listening?