The way the state of Illinois distributes funds for public schools isn’t fair, everybody agrees, because suburban districts with high property tax revenues get more money per pupil than poorer districts, say, in rural areas. The way the state distributes money was last revised in 1997, and it’s a complicated formula, some parts of which take poverty into account and some that don’t. 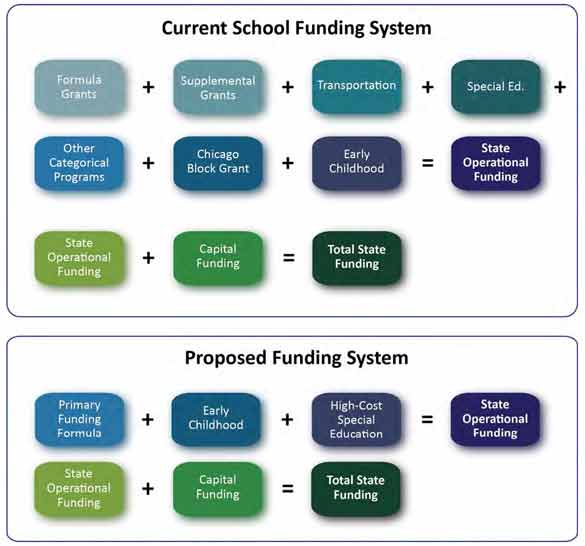 Senate Bill 16, which would redistribute state funds based on each district’s demonstrated need for the money, got a favorable committee vote on May 7 and could hit the Senate floor in the coming week. Its chances in the House aren’t so good, this being an election year and many suburban lawmakers realizing the drastic cuts the bill would bring in the general state aid their districts receive.

The bill’s chief sponsor is state Sen Andy Manar, Democrat of Bunker Hill. It arose out of the work of the Education Funding Advisory Committee, which Illinois created last year to study the issue of school funding.

I say SB 16’s chances are limited in the House because, for example, while downstate Pana would get 30 percent more money next year from the state than the district received last year, which totaled $5,186 per pupil, northwest suburban Barrington would lose about 80 percent of its current formula funding. Pana would get about $1.7 million more next year if the bill becomes law, but it would come at the expense of districts like Barrington, which now spends about $8,225 per pupil.

“I would agree that the current way we’re doing things is not making sense and it’s probably not fair across the state,” The Associated Press quoted Barrington Superintendent Tom Leonard as saying. “But some of the costs we have are not the same as others.”

Barrington, he said, spends the additional state aid to pay teachers in the district a higher salary than Pana pays its teachers, keeping schools in Barrington competitive with nearby districts for the top teaching talent in the area.

Pana Superintendent David Lett, though, was quoted as saying, “I don’t think we should be unduly burdened due to our poverty.” The declining state aid Pana has received in recent years has led the district to close a school, downsize staff, and eliminate educational programs.

These two districts are just examples of the inequity in state funding that can be shown across Illinois. Only about 45 percent of the money the state sends to schools comes from the general state aid funding formula, so Barrington wouldn’t lose 80 percent of its total per-pupil spending, but suburban districts have come to rely on this money—or 89 percent of it, as has been the case in recent years.

Via the Peoria Journal-Star, the AP reports by Kerry Lester are here and here.

The second article quotes state Superintendent Chris A Koch as saying that even if SB 16 doesn’t become law, the discussion it has spurred has brought to light several important factors about how the state funds its schools. “We’re having rich and thoughtful discussions about the have’s and have not’s and how money’s being distributed,” the AP quoted him as saying. “We need this conversation.”