By informing marching band students of the danger of hearing loss, researchers from the University of Florida, Gainesville, were able to reliably increase at least the occasional use of flat-attenuation earplugs, the American Journal of Audiology reported in its June 2014 issue.

Melissa Auchter and Colleen G LePrell conducted a self-report survey of two high school marching bands, asking students how often they used earplugs to protect their hearing. The proportion of students who used earplugs after watching a DVD training about hearing loss in band increased from 23 percent to 62 percent, a statistically significant increase.

The DVD was from Adopt-a-Band, which is an educational program about hearing protection created by Etymotic Research. It is claimed that marching band rehearsals can reach loudness levels of 120 decibels.

According to the company’s website, the goal of Adopt-a-Band is “to promote awareness among young musicians, music educators, and parents about the importance of protecting hearing. The program is easy to join and available to everyone. Your donation provides high-fidelity hearing protection and educational materials on safe listening levels.”

The Occupational Safety and Health Administration sets legal limits on noise exposure in the workplace, and those limits can be useful for musicians in marching bands as well. The limits are based on a worker’s time-weighted average over an eight-hour day. With noise, OSHA’s permissible exposure limit is 90 dB for all workers for an eight-hour day, well below a marching band’s level. A marching band, however, doesn’t play for eight hours at that average level.

The OSHA standard also requires a 5-dB exchange rate. This means that for every 5-dB increase in the noise level, the amount of time a person can be safely exposed to it is cut in half. That is, if the noise level is 120 dB, 30 dB higher than OSHA’s eight-hour exposure limit, we have to cut the time in half six times: 4 hours, 2 hours, 1 hour, 30 minutes, 15 minutes, 7.5 minutes. The legal limit for exposure to noise at the 120-dB level would therefore be about seven minutes.

However, the Centers for Disease Control and Prevention publishes an entirely different standard, based on recommendations from the National Institute for Occupational Safety and Health. They use an 85-dB limit and set the exchange rate at 3 dB. Now that 120-dB marching band is 35 dB louder than the permissible exposure limit from NIOSH, meaning the safe exposure time has to be cut in half about 11 times. The new computed exposure time is between 6 and 13 seconds.

The basic mechanism for hearing loss 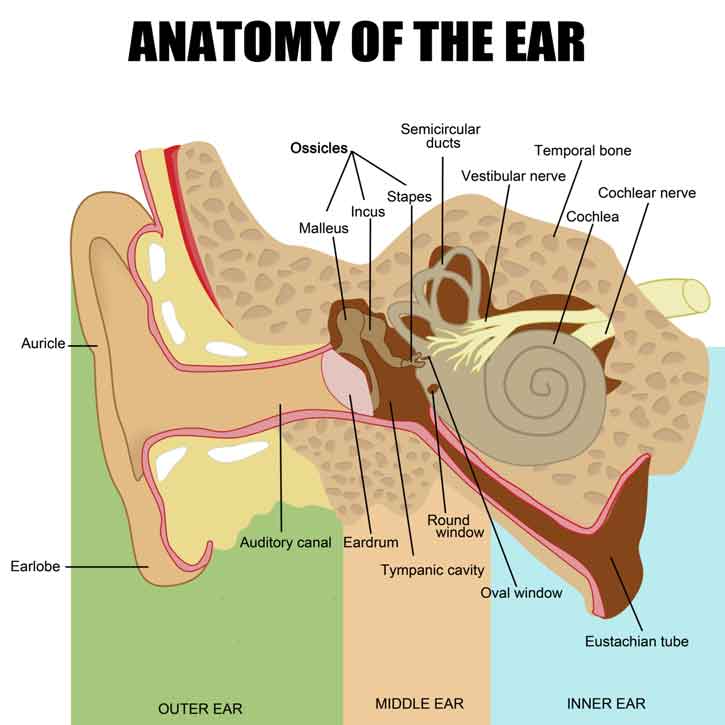 Hearing loss due to loud sound happens when microscopic hairs in the cochlea flatten down because of the loud vibrations. If they become flattened enough, they may never be able to straighten up again. A warning to the iPod generation: If I can hear your music from across the room, your earbuds are too loud, because once those microscopic hairs are flattened, hearing loss is permanent.

Another warning: if you experience ringing in your ears or temporary reduction of hearing sensitivity after a rehearsal or performance, get some earplugs and have your band take steps to reduce exposure to unsafe noise levels. For example, inexpensive sound-level meters can be obtained (not just an app, because those have widely varying quality) and checked periodically during rehearsals.

About 50 million Americans are living with some hearing loss, the Hearing Health Foundation says. That includes hearing loss from exposure to noise that was too loud or too long in duration.

“When we are exposed to harmful noise—sounds that are too loud or loud sounds that last a long time—sensitive structures in our inner ear can be damaged, causing noise-induced hearing loss,” the foundation writes. “These sensitive structures, called hair cells, are small sensory cells in the inner ear that convert sound energy into electrical signals that travel to the brain. Once damaged, our hair cells cannot grow back.

“Scientists once believed that the pure force of vibrations from loud sounds caused the damage to hair cells. Instead, recent studies have shown that exposure to harmful noise triggers the formation of molecules inside the ear that can damage or kill hair cells.”

Melissa Hatheway, who has worked on hearing loss and other health impacts of music on musicians at the University of North Texas, Denton, recommends marching bands, first and foremost, use earplugs, especially during practices, which often play loudly for longer periods of time than performances. She also says band members sitting in the stands at football games, especially color guard members who sit right in front of the snare drums, are at greatest risk, as is the person who runs the metronome at rehearsals.

“That person is right next to the loudest source of sound, and that’s, again, really directional, it’s coming out of the front of that long-range speaker, and it’s really loud,” she said on a Marching Roundtable podcast last month. “That person should be required to wear earplugs at all times.”

Her other recommendations to protect band members’ hearing: