The state of Maryland is home to more gold and silver medal winners, among public high schools and on a percentage basis, than any other state, US News & World Report says. 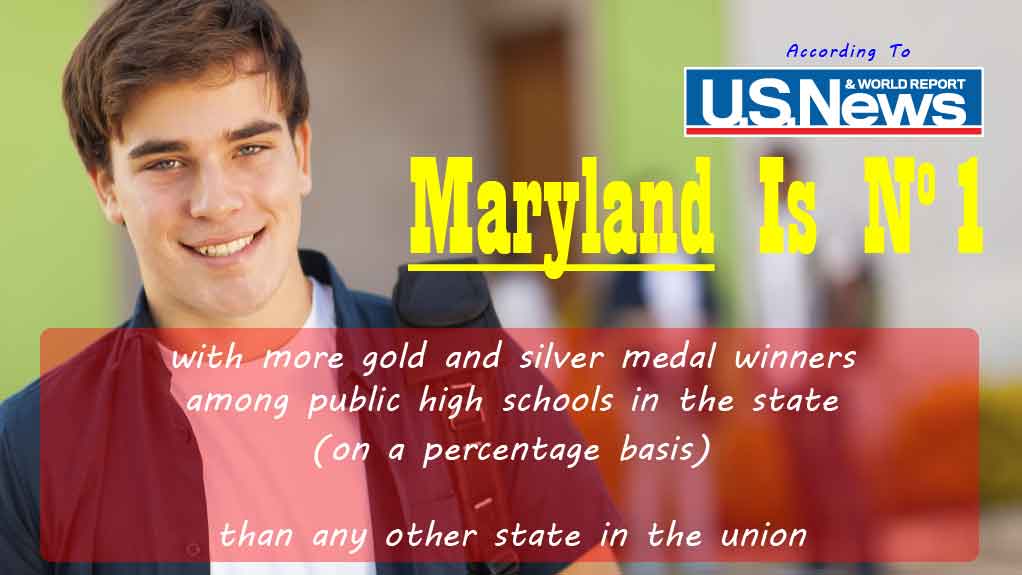 The top high school in Maryland, according to US News & World Report, is Walt Whitman High School in Bethesda, part of the Montgomery County Public School System.

Statistics used included the student:teacher ratio, college readiness (based on the percentage of 12th graders who had taken and passed Advanced Placement exams), and student performance on the Algebra I/Data Analysis and English 10 High School Assessments.

I don’t wish to belittle these rankings from a respected source, which has made quite a name for itself ranking colleges, grad schools, hospitals, mutual funds, and cars. However, we are generally opposed to any list that ranks one state, school, or student higher than any other.

Proponents of ranking systems point out that the lists are ways to determine one’s place in the world and to aspire to get better by using those schools on top as role models. On the ground, it doesn’t usually work that way: the top schools grow complacent and resist even positive changes because other schools can’t really serve as models, and the bottom schools grow helpless because using the top school as a model causes them to set unrealistic goals.

Illinois was tied for 19th place on the list. Northside College Prep in Chicago was the top public school, and the top four were magnet schools in Chicago. In fifth was a traditional public school, Adlai E Stevenson High School in Lincolnshire. As we pointed out, magnet schools can restrict enrollment to students who are already doing AP work, so their numbers are artificially inflated, compared to the AP numbers at traditional public high schools, which serve all students within a certain geographic boundary, not just students who were specially selected for enrollment at the school.

We therefore stop short of additional commentary on US News & World Report’s list. Although I’m sure schools whose students take a lot of AP tests are doing well in other areas of student and community engagement, the magazine never considers these other factors that we believe contribute greatly to the quality of US high schools.