Since 1902, Maryland students have been allowed to drop out of high school when they turned 16, but the state’s dropout age is rising to 18 in hopes of getting more of them to their high school graduations, Southern Maryland News reports. 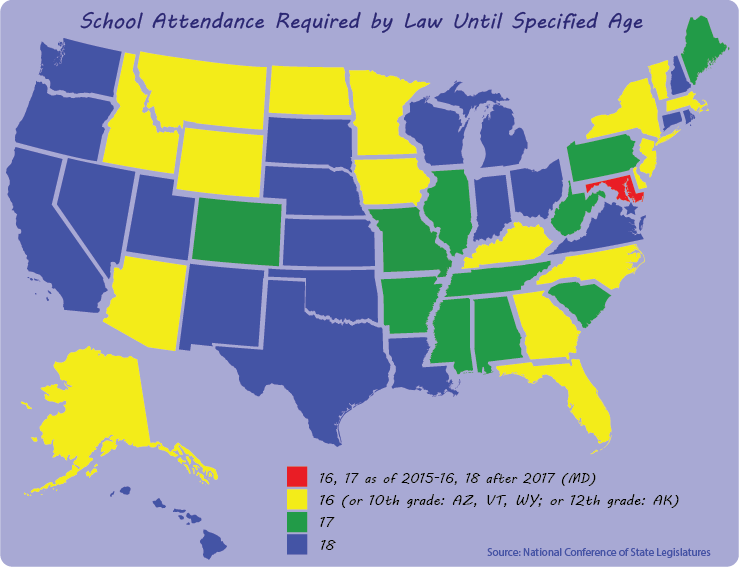 “If we don’t let you go at age 16, even though you might be inclined to do so and have family that supports that, we get one more year with you and one more opportunity to get you a step closer to graduation,” the paper quoted Calvert County Public Schools Superintendent Daniel Curry as saying of the new Maryland law signed in 2012 and taking effect next school year.

A state commission in 2011 studied the prison population in Maryland and reported that about half of all inmates under 25 had not graduated from high school. While the dropout rate in Calvert County is among the lowest in the state, about 4 percent, school officials expressed hope that the change in the law will improve even Calvert County’s already low number.

“I certainly think that keeping kids in school is the goal of every school system, so while we may still have a low rate overall, we still have kids who don’t complete, and if we can get five kids to stay in school or give kids other options prior to dropping out, our hope is for that number to be zero,” the paper quoted Kim Roof, director of student services for the district, as saying.

In most states, there are exceptions to the rule. Marriage generally makes students exempt from compulsory school attendance laws, as does parental consent and passing of a G.E.D. in most places. The Maryland law, passed and signed in 2012 as Senate Bill 362, won’t stop students from graduating early or on time if they happen to be younger than 17 or 18 at the time of their graduation. Maryland students in the military or being schooled at home or in a hospital are also exempt from the minimum dropout age requirement.