Students in Christina Chang’s drawing and painting class at Burlington High School in Massachusetts were asked to draw or paint a representation of how they felt about standardized tests. Ms Chang gave them some old scantron sheets, offered drawing and painting materials, and then posted nine of their works on her blog, here. 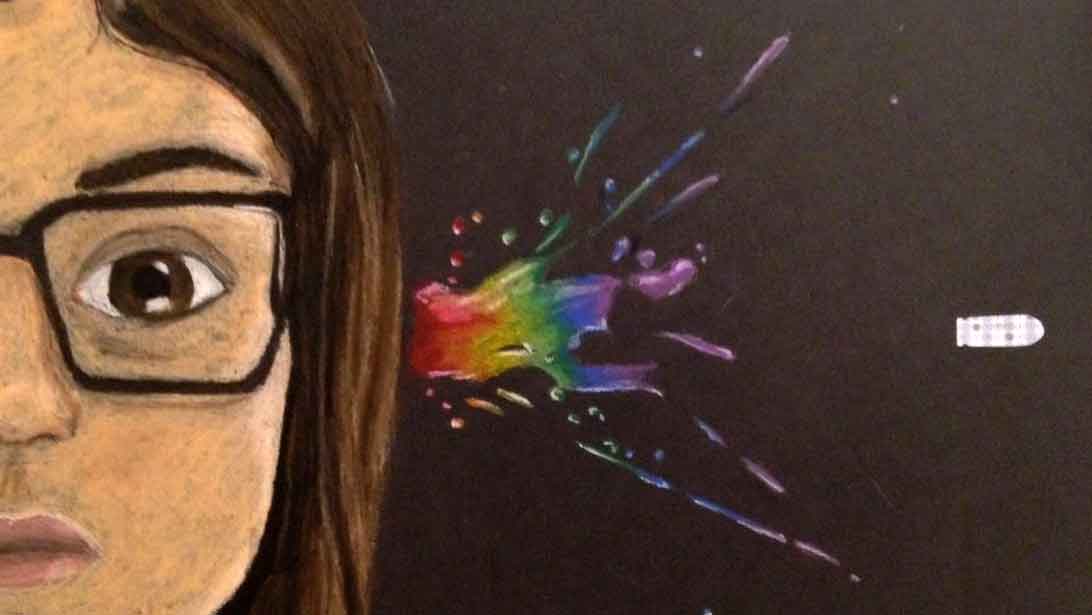 Part of a painting by Josephine Samarjian, a student at Burlington High School

What has me puzzled is that we make laws to protect children from other negative influences in their lives that would make them feel like killing themselves, such as cyberbullying, but our laws concerning standardized tests are actually working in the reverse direction, it seems these nine students are saying with their artwork.

I am truly sorry standardized testing, as it exists today, makes them feel that way, but I see these paintings as eye-opening and honest.

One question we have to ask ourselves is, How can we measure student progress in a way that doesn’t make them stress out? I can think of a few ways off the top of my head:

Some of these alternatives may even be fun, and that would make learning fun, and that’s kind of the point—and the total antithesis of what standardized tests seem to be doing to our kids.

A problem comes in, which No Child Left Behind tried to address but did so quite unsuccessfully, when we have different teachers scoring the results using different guidelines. If we hold students in Burlington to one set of standards, we should hold students in Baltimore, Chicago, New Orleans, Peoria, and so on, to those same standards when scoring their assessment instruments, whatever we use. That’s the only fair way to do it: if kids in Burlington have to do something under the law, kids in Chicago have to do it, too—at least as far as the minimum accountability requirements are concerned.

Final projects, portfolios, and even formative assessments that would provide feedback to teachers who could then design lessons around the help students actually need to succeed, all take time and money, which is in short supply these days. Scantron bubble-sheets, which can be scored by computer, are faster and cheaper.

Federal law requires that we assess student learning, and today’s inadequate and unfair standardized tests are the result of those laws. I think these kids are telling us adults it’s time to come up with some better laws, so kids don’t have to opt out of their education—or even a small part of it—to keep from shooting themselves in the head.