Just a few months after the bicentennial, on the field at Memorial Stadium on the campus of the University of Illinois in Champaign, the drum major from Galesburg High School marched forward to receive an award for Best Drum Major in the annual Illini Marching Band Festival.

To receive awards like this, drum majors sometimes remove their hats, so the hat came off.

Down fell some long hair, and the crowd gasped a little, amazed to see a girl serving as drum major, but the trend was just beginning at the time.

“It was a big thing, because marching bands were very male-oriented,” the Galesburg Register-Mail quoted Jill Marasa, a member of the Galesburg High School Class of 1977 and the school’s first female drum major, as saying about the festival at a reunion last weekend for their band director at the time, Sally Rynott. 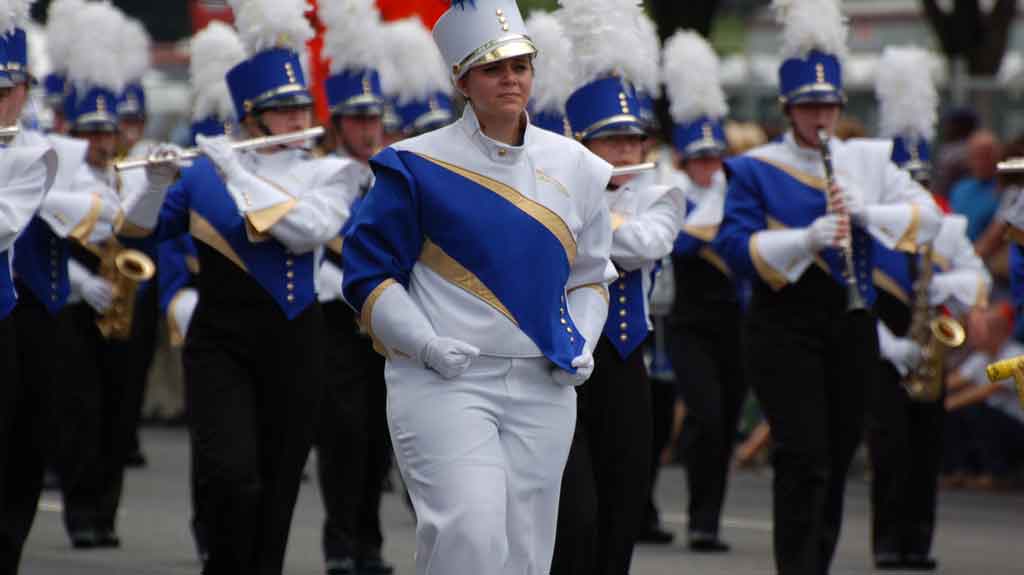 The band from Seckman H.S. in Imperial, Mo., marches in the 2015 National Independence Day Parade. (Voxitatis)

These days, it’s rare indeed to see a high school marching band led by an all-male team of drum majors, unless there’s only one leading the band on the field. But if two or more drum majors lead the band, it’s most likely at least one of them’s a girl.

For example, of the 34 bands that advanced to the semifinals at the Bands of America 2009 Grand National Championships, all had at least one female drum major for sure, except for three, which had two male drum majors and a drum major with a unisex name, such as Chris or Sean.

Ms Rynott served as band director at Galesburg from 1968–1985, according to the article, and she was known for running a tight ship.

“We would stand at attention for however long it took, half hour maybe, and we would get graded ,” the paper quoted Thomas Karjala of the Class of 1983 as saying about the military-style uniform inspections that were common under Ms Rynott. “Kind of unusual and different, even at that time, for high school band.”

But the discipline paid off and made the group closer, with several former band members coming up with the idea of the reunion at a class reunion two years ago.

“These people were my kids,” Ms Rynott told the Register-Mail. “I was so proud of them and I just had to see them again, and I was so glad they were holding this so we would have time together.”