Panelists discussed the advantages and disadvantages of using artificial turf instead of grass on athletic fields during the annual conference of the Maryland Association of Counties last week. 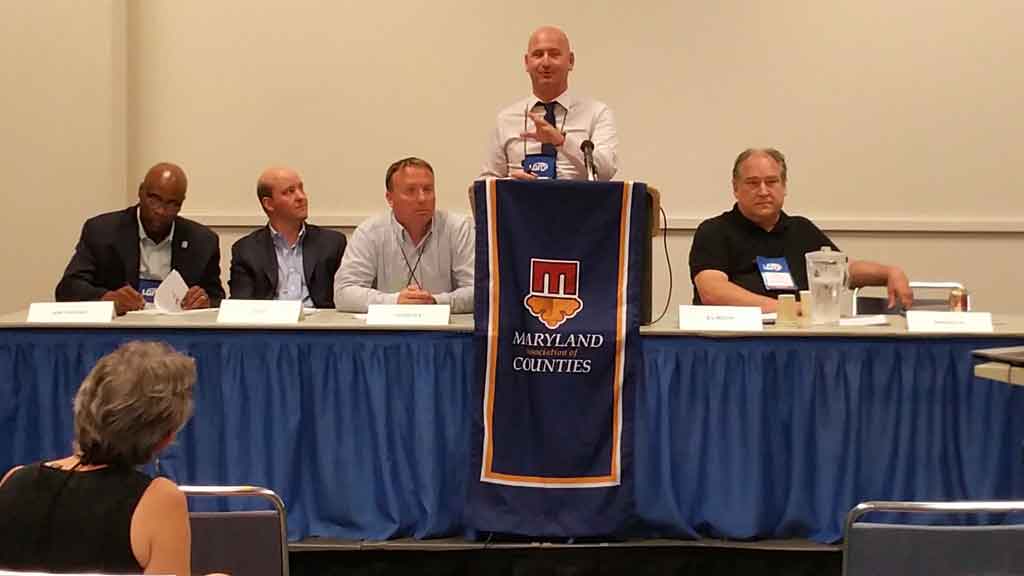 Artificial turf athletic fields have become much more common in the last 20 years or so at high schools. Unlike natural grass fields, those made with an artificial turf surface can be used year-round. Plus, maintenance costs are lower for artificial-turf fields than for grass.

However, some people have said certain materials used in artificial turf may be toxic to children and adults. This includes the rubber crumbs used as filler, which are made from recycled tires and may give off chemicals that kids using the field inhale.

Darren Gill, vice president of marketing, innovation, and customer service for FieldTurf, said there was no scientific data showing that crumb rubber fields are a cancer-causing agent. He compared the amounts of various chemicals found in crumb rubber to the amounts found in common foods and other household products, noting that the potential for exposure to those chemicals was higher from the food and household products.

Montgomery County Council member Marc Elrich took issue with that, saying that although no individual material in crumb rubber is at a danger level, no studies show how those materials may act in concert. “There are a lot of reasons to show caution,” he said, pointing out that Montgomery County had banned the use of artificial turf in its parks.

Natural grass isn’t without its supporters, too. One advisory group leader claimed the advantages of artificial turf were only in perception and didn’t reflect reality.

We believe that, although up-front costs of artificial turf are high, the field eventually pays for itself in reduced maintenance costs. Plus, marching in a band or playing football on a well-marked field with consistent footing, 365 days a year, beats marching or playing on an inconsistent and occasionally muddy natural grass field with uneven topography.

In April, Voxitatis put the opinions of championship marching band directors from Illinois, Indiana, and Oklahoma on the record as saying artificial turf is a boon for music education. Sure, artificial turf brings safety advantages to student-musicians and student-athletes, but also, “I believe even more in the fact that the students are set up for success when they march on turf,” Chris Kaflik, band director at Broken Arrow High School in Oklahoma, told us.